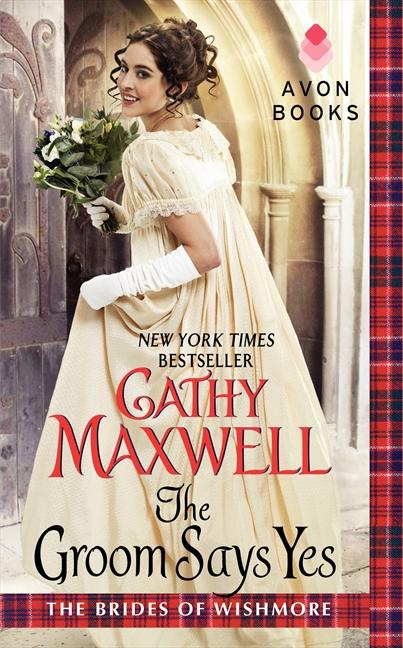 New York Times bestselling author Cathy Maxwell continues her dazzling series, The Brides of WishmoreHe had a noose around his neck and a price on his head . . .

Sabrina Davidson, dutiful daughter, avowed spinster, thought she’d secured a place for herself in Aberfeldy society— until her hard-earned acceptance of her fate is challenged by the arrival of Cormac Enright, earl of Ballin, trained physician, soldier of fortune, and convicted felon.

A prim and proper miss was the last thing he needed . . .

Mac is determined to clear his name, but first he has to find the man whose testimony sentenced him to a hangman’s noose. Of course, Robert Davidson is missing and protecting Mac is Davidson’s daughter, the most entrancing, frustrating, beguiling, stubborn woman Mac has ever met.

And it doesn’t help that he has already tasted her kisses. Or that he has found in her a passion for life and adventure to rival his own.

Mac has turned Sabrina’s world inside out—but what will happen when he leaves?

Or will the Groom Say Yes?

Mac didn’t know what startled him most—that his angel was Davidson’s daughter, or the ferocity of her attack.

Instead of running like any sensible woman should, Miss Davidson charged him without fear. Her eyes in the moonlight were alive with outrage, reminding him of nothing less than a banshee, those demons of Irish lore.

He stepped back, bumping into the door frame and then moving into the hall. She followed, attempting to scratch the skin off of him.

Mac didn’t feel he could fight back, but he did want her to stop hurting him. He kept retreating, leading her toward the kitchen where there would be more room for him to maneuver than in the narrow hall. She ruthlessly went after him.

Inside the larger room, Mac ducked under her arms. Using his superior strength, he easily lifted her off the floor and upended her over his shoulder. She kicked her legs wildly and attempted to reach around him in the most unladylike way possible to strike a deadly blow.

He had to admire her. She was protecting her father. His business with her sire was deadly serious—however, she had changed the game.

Mac owed her his life. He might have survived his illness without her care but it would have taken longer for him to recover . . . and, while holding her struggling body against his, he realized that making love to her had done more to restore his spirit than any amount of nursing could have achieved.

Theirs had been no ordinary coupling. It all returned to him now. This woman had true passion. Even now, he felt himself respond to her, in spite of her wanting to rip the ears off of his head.

So she must stop this nonsense. He needed to find her father and she was a distraction.

He set her on her feet with a thud and whirled her around before she could react. He grabbed both her arms below the shoulders and held her captive. He was ready to order her to behave . . . but the words died in his throat.

The fire from the hearth filled the kitchen with golden, flickering light. The bonnet she’d been wearing had come undone and fallen to the floor somewhere in their struggles. Her hair tumbled down around her shoulders in thick, round curls. Her eyes sparkled with defiance and, yes, fear. Luminous eyes that told him she was afraid but she’d not run.

Eyes that could bring a man to his knees.

And because he couldn’t help himself, and because it was what he desired, he kissed her.

It was the reasonable action in an unreasonable situation.

Nor was this kiss a common one. He couldn’t remember the last time he’d kissed a woman out of true, yearning desire and not to just to meet earthy needs. She had given to him what should have been her gift to a lover. He wanted to know why, to understand, and the mystery of her, combined with the tightening in his loins, was a potent mix.

Miss Davidson resisted. Oh, yes, she did. Her reaction was what he had anticipated. She was going to deny him. Her lips were hard and unyielding, but her body no longer strained away from him. Instead, she had gone still, unwilling to surrender and, yet, no longer ready to fight. He sensed her struggle. She was as attracted to him as he found himself to her. It was there in the kiss. A brush of the lips and the energy between them changed, even though she kept hers tightly closed. She was determined not to yield and yet she didn’t shy from him either —

The sound accompanied the force of a broomstick across his shoulders. “Unhand her,” a woman’s voice ordered.

Such was the power of the kiss, it took Mac a second to feel any pain. He raised an arm to defend himself but he didn’t want to let his lips leave Miss Davidson’s–until he was whacked with the broomstick a second time. This time across the back of his ribs and with more force.

He released Miss Davidson and faced his attacker, an older woman of indeterminate age. She had graying blonde curls beneath a jaunty flower bonnet. The same sort of flowery pattern was repeated in her violet and blue dress. Lace gloves covered her hands holding the broomstick.

His first thought was to Miss Davidson’s safety. He reached to keep her protectively behind him, but she had already scampered away.

“Who are you?” he demanded of his new opponent.

Her response was to swing the broomstick with an impressive show of strength. It whooshed through the air smacking him hard on the other side of his ribs.

Just as he winced from that pain, a good-sized pottery mug whizzed by his head.

He was under attack.

Miss Davidson had fled his arms only to begin pulling cups and bowls off the cupboard beside her. She threw them at him with all her might.

Mac knew when to run.

Unfortunately, the flower lady blocked his escape to the door.

He leaped across the table, uncertain how he was going to extricate himself from this complication. He raised his hands to sue for peace.

Miss Davidson threw another cup. It hit him in the shoulder.

“All right,” he said, his temper growing. “Let’s talk about this—”

The flower lady swooshed the air with her broomstick.

Mac ducked in time to save his head.

He straightened, ready to grab that broomstick from her and break it in half—when he realized the women were no longer paying attention to him.

Instead, Miss Davidson, her hand in the air ready to lob a soup bowl in his direction, stared at her compatriot in open-mouthed surprise. “What are you doing here, Mrs. Bossley?”

“Helping you.” Mrs. Bossley spit the words out with equally fevered disdain.

Miss Davidson’s chin lifted. “Remove yourself from this house right this minute.”

“I will not.” The unwelcome Mrs. Bossley brought her broom to rest on the floor. “I must see your father. Once I’ve seen him, then I will leave—but not a moment until.” Her voice shook as she spoke and Mac noticed for the first time her nose was pinched and her eyes red-rimmed from crying.

He felt rather sorry for her.

Miss Davidson didn’t. “Once you’ve seen him? Haven’t you been with him enough? Can you not bear a moment apart from my father?”

“I must see him,” Mrs. Bossley announced dramatically before throwing her broomstick to the floor. She went running out the door shouting, “Richard? Richard, please. I need you, Richard. I can’t bear to be without you.”  Her footsteps pounded down the hall toward the stairs.

Miss Davidson put down the bowl she’d been holding and charged after her. “Where do you believe you are going? Come back here. Come back here right now. This is not your house.”

And Mac found himself alone in the kitchen.

He could leave the house now. No one was paying attention to him, and a man wanted for murder should not linger in one place for long.

However, if he did depart, he might miss more of the entertainment and he discovered he was enjoying himself. It had been a long time since he’d felt so engaged in life.

So, instead of going out the back door, he followed the hallway to the front stairs where a lively battle was being fought.