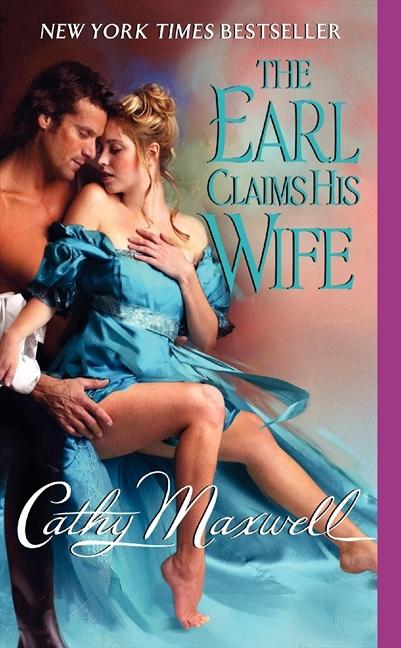 The Earl Claims His Wife

Preoccupied with fighting Napoleon and making love to his mistress, Brian Ranson has ignored his wife since their wedding. But now that he’s become the Earl of Wright, he’s ready to fetch his bride back to London. He’s shocked to find she’s become a bold, beautiful woman, exactly the kind he lusts after . . . and she wants nothing to do with him.

Gillian, Lady Wright, is desperate to seize the love she’s been denied . . . but not with her rakish husband! So she makes a bargain—for thirty days she’ll be the perfect wife, then he’ll set her free. But no matter how she hardens her heart against her damnable earl, her body begs her to surrender . . .

“Are you challenging me to a duel?” Wright asked.

“I am,” Andres answered.

“Swords?” Wright suggested without missing a beat. “I’m afraid it must be done now. I don’t have time to waste. I wish to be back on the road as quickly as possible.”

“Then you may leave now,” Andres said amicably.

“Not without my wife,” Wright answered quietly.

“No, you mustn’t,” Gillian said to Andres.

“I do it for you, amor,” he said quietly in his Spanish accented English. “I love you, Gillian. From the moment I saw you, I knew I was to be with you. Do not worry. All will be well. There isn’t an Englishmen who is a better swordsman than I.”

He loved her. He’d said it aloud. She’d never had anyone say those words to her before—and he’d said them in front of husband.

But right now was not the time for her to be distracted. What if Wright ran him through? What then? Did all men think themselves immortal?

Gillian turned away from him and walked over to where her husband now stood preparing for the duel.

“Wright, you must not fight. Not over me.”

Her husband folded his well cut coat and placed it on a stump by the stable door that was used as a stool or a mounting block. “I take care of what is mine, Gillian.”

She made an impatient sound. “Don’t claim this is about me. Never me. I matter little to you.”

A spark of fire came to his eye. “Obviously you matter a great deal or I wouldn’t be here.”

She shook her head. “Wright, our marriage was a sham. It was one of convenience. You married me because of my father’s political influence.”

He released an impatient sigh. “Gillian, this is an old argument between us. So what if those were considerations when I asked for your hand? You could have refused. Why didn’t you?”

Now it was her turn to take a step back. She could never tell him the truth—that from the moment she’d first laid eyes on him, she had tumbled in love with him. He’d think her even more provincial than he already did.

Besides, that heady, earnest young love had long since died. Her heart was now as hard as a metal shield against him.

“We all make mistakes, Wright,” she said, proud at how imperial and cold she sounded.

A flicker of emotion she could not name seemed to pass through his eyes. He looked away and it was gone. The man she knew as her husband returned. “Yes,” he drawled, “apparently we all do.”

“I hope he runs you through,” she said. Turning, she walked away.

A few moments later, the men faced each other, swords in hands.

Gillian crossed her arms. A part of her didn’t believe this was going to happen. Men didn’t fight over her. Especially her husband.

“As you wish,” Andres answered without any sign of emotion.

And then they raised their swords.

Wright was a bruising swordsman. Gillian had heard him described that way by an officer who had served with him on the Pennisula. For the first time she realized her husband had killed men.

She didn’t know Andres’s experience but she knew his heart. He would fight to the death for her.

There was the slide of steel on steel and then both men drew their arms back, preparing to fight–

Gillian found her voice. “No.” She rushed forward, even daring to step between them. They pulled their weapons back just in time, but Gillian was not concerned with her own safety.

“This is nonsense,” she informed them. “I’m not worth fighting over.”

Wright was quiet, wary and impatient. Both men were anxious to continue their duel . . . and Gillian knew what she had to do.

Her husband would not give up. Not with his pride at stake.

And Andres . . . Andres so much wanted to be her champion. His love, his loyalty pierced her soul.

She had only one option. “I’ll return to London with you, Wright. You’ve won. Have a coach readied. We’ll leave as soon as I pack.”

She did not wait for a response but started walking toward the house.