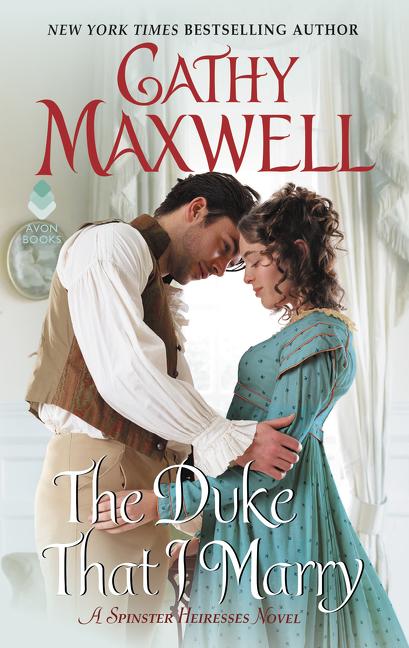 The Duke That I Marry

Once upon a time there were three young ladies, who, despite their fortunes, had been on the marriage mart a bit too long. They were known as “the Spinster Heiresses” . . .

Is it wrong for a woman to want more?

Not if she is a Spinster Heiress. They do not settle. Any young miss would be very lucky to find herself promised to a man like the Duke of Camberly. However, Miss Willa Reverly has watched her friends marry for love. Camberly may be the prize of the season, but she will not be “sold” to any man. She wants his devotion or she wants nothing at all.

When is a Marriage of Convenience inconvenient?

Newly named to the ducal title, Matthew Addison is determined to discover the secrets behind Mayfield, the bankrupt estate he has inherited. He doesn’t have time to coddle a headstrong heiress who is determined to ditch him over something as silly as “love.” Little does he know that his questions will place her in jeopardy. Now he must do what he must to save them both.

Could it be that in running from danger they might be racing headlong into a truly unexpected fate: falling in love?

Read The Duke That I Marry Excerpt

THE DUKE THAT I MARRY
By Cathy Maxwell

The day before the wedding, Matthew Addison, Duke of Camberly receives a terse message from his intended Willa Reverly. Granted he’d been dragging his heels about the wedding, no one jilts a duke . . . well, except for the surprisingly headstrong Miss Reverly–

The trip to London had not been an easy one. The overcast day had given way to rain and mist, and the only horse available to Matt from Mayfield’s stables had been a difficult mare with her own mind. Matt and the blasted animal had argued from the moment he’d left his stable door until the reins had been turned over to a street lad to keep the mare walking to cool her down.

So Matt was not in a conciliatory mood.

He had also not bothered to stop at his London home to change. He wasn’t afraid to let Miss Reverly see him in his mud-splashed boots and breeches. Let her know that he had taken her letter seriously.

Her terse wording was branded in his mind: We are not suited. I am releasing you of any obligation to me. Sincerely, W. Reverly.

What was she, a solicitor? She was releasing him with two sentences?

Miss Reverly’s curtness was not how a woman should write to a man to whom she’d been promised. She hadn’t minced words but had been clear she was willing to mince him.

The closer he’d come to London, the more he’d wanted to know why. What had he done to set her off? He hadn’t even been in London since the evening of their betrothal party.

And now here he was cooling his heels in Reverly’s palatial London home that spoke of money and power. All the furniture was gilt-painted wood. There wasn’t a worn carpet or threadbare pillow in sight. The air was scented with beeswax and the room showed the meticulous care of dozens of well-paid servants.

Gracing the walls were as many paintings as could be found in any stately house. A few were of landscapes or good horseflesh. Most were portraits, although Matt doubted if any were of Reverly’s ancestors. The man had supposedly come from humble roots, worked hard, and married well.

Matt suspected some of those paintings could have been those sold from Mayfield. Reverly was known to have a fondness for a bargain. He’d turn any agreement in his favor. “Greedy as a fox,” one lord had warned Matt.

Well, God willing, the man would be his father-in-law.

Matt paced the length of the receiving room, struggling with his pride and temper and considering how best to approach the rebellious Miss Reverly.

Someplace in the house, footsteps could be heard. A clock chimed the hour. Late afternoon. He’d made good time from Mayfield.

A footman had taken his greatcoat and hat. However, his hair was damp. He combed it back from his face with his fingers just as he heard voices, feminine ones. He squared off with the closed double doors.

One half opened—and Miss Reverly seemed to float into the room.

For a moment, he was caught off guard. He’d forgotten how graceful she was. She reminded him of a petite opera dancer. Perfectly formed, no movement wasted, comfortable in her own skin.

And lovely. Far prettier than he remembered.

Four months ago, Matt had still been preoccupied with thoughts of Letty. Now, he was struck by what he hadn’t noticed about his intended.

Yes, Willa Reverly was a mite of a thing . . . but there was something about her presence that made her seem taller and stronger than her size indicated. Dark, thick hair and clear skin made her conventionally pretty. What set her apart was the intelligence in her snapping blue eyes and the determination in her attitude.

For the first time, Matt realized perhaps one shouldn’t underestimate an heiress.

She was not alone. To his surprise, Cassandra, Soren’s wife, was with her. Any other time he’d be delighted to see her because this meant his good friend was in town.

However, now he struggled not to frown. He had no desire to have an audience for this interview. At least he liked Cassandra. Soren had chosen well. And yet, there was nothing he could do about the matter of her presence but play his part.

“Your Grace.” Miss Reverly made the barest of curtseys.

He returned with the barest of ducal bows. They were as formal as strangers.

“Miss Reverly, you could put a garden full of flowers to shame.” One thing Matt had learned about London ladies, they lapped up this nonsense. He truly believed it was impossible to overflatter one of them.

Willa Reverly disputed his theory. Annoyance and, yes, disappointment crossed her face. “One should expect a better compliment from a poet.”

So much for pleasantries . . . and his assumption that Willa was like all London ladies.

Riding had given Matt time to think and face some hard truths about himself. He had taken her sizable dowry for granted.

His sojourn in the country? Yes, it was true that Letty had broken his heart, except that, to be honest, he’d latched on to her because being named Camberly had been overwhelming. He’d never imagined he’d take on the title, even after his uncle had died. He’d naïvely assumed his grandfather would live forever. The old man must have thought the same or else he would have helped Matt become better prepared.

However, a blackmailer and a sharp-tongued heiress were waking Matt up.

Unfortunately, he was not liking Miss Reverly very much.

Perhaps because she was right? He hadn’t given much thought to her. Guilty as charged?

He turned his attention to Cassandra. “How are you, Lady Dewsberry? Married life appears to suit you.”

“It pleases me very well, Your Grace,” she replied smoothly, with enough of a twinkle in her eye that he knew Willa had confided in her about the note.

Did that mean Willa had also spoken to her father? Perhaps Leland Reverly was even behind the message? If that was the case, there would be no dowry.

Keeping his smile determinedly fixed on his face, Matt said to Willa, “May we sit and talk?”

“I have said all I wish to say,” was her rude reply.

“And yet, I apparently have much to explain.” His voice sounded genial, but tight. It was the best he could manage.

“Why, Your Grace, I have no interest in hearing explanations.”

She delivered her insults with a sweet, false smile, the sort of smile that meant she was furious with him—and that was good. Women never had strong emotions for things that didn’t matter to them. His sisters had taught him that.

The time had come for him to take command.

To Cassandra, he said, “Would you excuse us, my lady? Miss Reverly and I require a private moment.”

“Don’t you leave this room, Cassandra,” Miss Reverly countermanded. “My guests are not to be dismissed.”

“Not even to discuss an issue of importance between us?” Matt asked. He attempted to sound polite. Instead, he came off testy.

“I’ve reached my decision. There is nothing to discuss.”

My decision. Interesting, and hopeful. Her father might not be aware of what she’d done. “I ask that you hear me out.”

“Your Grace, you may talk, but I will not listen.”

“Then perhaps I should discuss this with your father?”

Her shoulders came back, her chin forward. “He has nothing to say to you.”

“Then our conversation will be brief. I will have your butler ask him to join us.” Matt took a step toward the door.

She stepped in his path. “He is not at home.”

“He doesn’t know about your letter, does he?”

Miss Reverly looked to Cassandra, who had an I-warned-you expression on her face. Matt decided the time was right to repeat his earlier request. “Lady Dewsberry, I wish a word with Miss Reverly.”

“Yes, I believe that would be wise.”

Her friend was already to the door. “I must, Willa. This is really between you and His Grace. My husband has taught me there are some conversations that should be private. But, please, give him a chance. Like women, men often do foolish things.” She gave Matt a considering look and then shrugged her shoulders. “He might make a decent husband in the long run.”

“Long run?” Miss Reverly echoed, her brows rising as if she couldn’t imagine such a thing.

“It all depends on how quick he is to train. No husband is perfect,” Cassandra allowed, and then added, conspiratorially, “If all else fails, the offer of our hospitality is still open. We will have the coach ready at midnight.” With those words, she left the room, closing the door behind her.

“You would not understand,” Miss Reverly said dismissively. As if she was the queen of Sheba, she moved to the middle of the room and sat on one of the many brocade upholstered settees. “Speak your piece, Your Grace. Let us hurry through this. I have plans for the evening.”

THE MAN THAT I MARRY