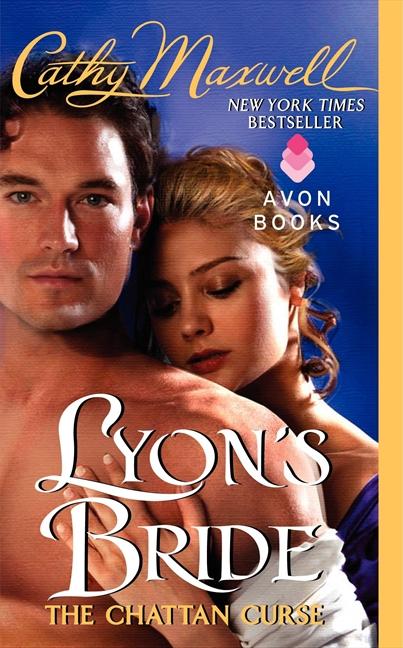 “When a Chattan male falls in love, strike his heart with fire from above . . . “

They call him Lord Lyon, proud, determined–and cursed. He is in need of a bride, but if he falls in love, he dies. His fervent hope is that by marrying–and having a son–without love, perhaps he can break the curse’s chains forever.

Enter beautiful Thea Martin–a duke’s headstrong, errant daughter and society’s most brilliant matchmaker. Years ago, she and Lyon were inseparable, until he disappeared from her life without a word. Now she is charged with finding Lyon’s bride–a woman he cannot love for a man Thea could love too well.

“Then I shall need to know what you are looking for if I am to sift through the large number of women who would be very pleased to marry a wealthy, well-respected nobleman.” Thea heard herself sounding like a society matron planning a party. She liked the tone. It was distant and didn’t convey the turbulence of her own emotions.

When he didn’t speak, Sir James prompted him once again. “Lyon, what are you looking for in a wife?”

His lordship stirred himself then. He answered, still addressing himself to Sir James, his voice low, almost inaudible. “Good family.”

How original, Thea wanted to say. Instead, she said, “Absolutely. And other qualities?”

There was a beat of silence. Thea felt her disdain for this man growing. After the confidences they had shared, how could he sit beside her as if they were strangers? How could he be so bloody cold?

“I don’t want a cold woman,” he said as if he’d divined her thoughts. “My mother was cold. Some say I am as well.”

But he didn’t used to be. A wave of sadness swept away her disdain.

“Good with children,” he continued. “Our children must be her priority.”

Something that hadn’t been true about his mother.

Thea resisted the urge to place a comforting hand upon his arm. If Neal hadn’t valued their friendship, he certainly wouldn’t want her pity now.

Warm thoughts of him vanished from Thea’s mind. “You don’t want to ‘like’ the woman who will be your wife?”

At last faced her, his features set. “No.”

“My lord, that is a ludicrous, irresponsible position.” The words burst out of her, carried by her previous disappointments in him.

His lordship sat up even taller. “I find it very responsible.”

“Then you are deceiving yourself,” Thea said. She’d gone this far, she might as well go further. “Not all marriages can be built on love, but those are the best. At the very least there should be the compatibility of admiration and respect. Of liking the person you take a vow before God to cherish and honor.”

“That is your opinion. It is not mine.”

Thea looked into his eyes and saw a stranger. “Whatever happen to that boy I once knew who believed in friendship?” she said. “That lad whose confidences I valued and whose opinion I trusted?”

“Let us take a moment to consider our words,” Sir James advised as if wishing to avert a disaster.

“I can’t help you arrange such a marriage as this,” Thea went on, ignoring the lawyer. “Knowing what I do of you, it would not be right.”

“You know nothing of me,” Lord Lyon countered.

“I beg to differ, my lord. I may know more of you than you know of yourself.”

“And what would that be?” he challenged.

Thea sat back, realizing she was now on very sensitive ground. How well did she know him? How much had he changed?

Certainly she wasn’t the same person she’d been during those long ago summer days.

But one thing was still clear in her mind–she believed in love.

The acknowledgement startled her. After all Boyd, her father, her family had put her through, she still believed.

It isn’t often one is struck with self-knowledge, and every time it is surprising. Suddenly, she realized why she’d set herself up as a matchmaker. She wanted to right wrongs, to guide others away from the disastrous decisions she’d made in her own life.

She softened her voice. “My lord, marriage is a difficult endeavor. I’m not saying you must love your wife, but you must like her. Otherwise you will be saddling yourself to a cold, uncompromising life.” The sort of life his parents had all those years ago.

The sort of life she remembered him vowing never to live.

Her change in tone worked. The fury in his eyes died, replaced by hopelessness. “You don’t understand.”

“Then explain to me,” she said.

Thea blinked, uncertain if he was being dramatic or factual. “Cursed?”

“Yes,” he said with complete seriousness. “And my only hope of survival is to marry someone I don’t like, that I will never be able to abide. It will call for a very special woman. I don’t want someone I would detest. There is difference between not liking and detesting.”

Thea glanced at Sir James to see if he thought his lordship was spouting nonsense. He nodded his head as if agreeing with Lord Lyon.

“You believe him cursed as well?” Thea challenged the solicitor.

Sir James shrugged. “There is evidence to suggest it.”

For a second, Thea wondered if she had wandered into a world of nonsense–and then her mind seized upon another possibility. A sinister one.

“Is my brother behind this?” she demanded.

Both Lord Lyon and Sir James acted perplexed at her accusation, but she was on to the game now. This was the only explanation that made sense. She stood. “Oh, this was very clever of him. I know Horace is not happy that I remain independent and even dare to go so far as to work for my living. But this?” She shook her head. “You should be ashamed of yourself, Sir James. And you, Lord Lyon. What a faithless friend you are. Apparently your title has destroyed whatever was good inside of you.”

“I beg your pardon?” Lord Lyon said. He’d risen when she did and now pretended to be clueless in the face of her accusation.

She moved toward the door. Her excitement over a healthy commission turned to disappointment.

Sir James came around the desk toward her. “Mrs. Martin, please, I don’t know what we said to upset you–”

She cut him off by whirling around, her outstretched hand a warning that she did not want him to come closer. “Enough. I can’t believe I wasted a half shilling on the two of you. Here you are giving into my brother’s schemes and for what? A payment, Sir James? Some sort of cloakroom political deal in the House of Lords, Lord Lyon? Oh, yes, I know how the duke works. He’s always hatching new alliances for his own benefit. But I once thought you the closest of friends and to my great dismay, you have grown into a man much like your parents–cold, distant, everything you said you wouldn’t be. Curses,” she said, biting out the word as if it were an epithet. “Did you really believe I would be so gullible? Well, return to my brother and tell him no one believes in curses in this day and age. Not even his sister, the one he refuses to acknowledge.” With that pronouncement, she opened the door and sailed out of the room.

Her response was to keep walking.