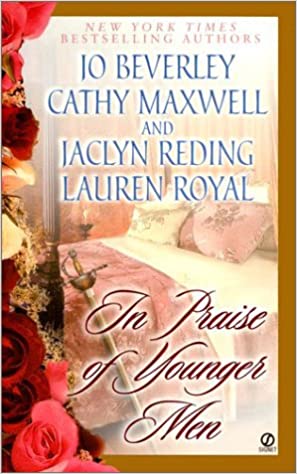 In Praise of Younger Men

What is the invigorating appeal of the younger man? Is it his boyish charm, his enthusiasm for life? His appreciation of a woman’s experience, and his eagerness to learn more? Or perhaps it’s his vigor, his unending appetite, and his willingness to please. In this scintillating quartet of stories by four of today’s most popular romance writers, the answers are discovered in a younger man’s embrace…in tender promises of pleasure whispered behind closed doors…in the hunger of his deep, soft, candlelight kisses…and in his ability to reawaken in his lover the joyous simplicity of a past innocence.

Cathy Maxwell’s “A Man Who Can Dance” introduces readers to Graham McNab, a man standing on the cusp of achieving his lifelong dream of becoming a physician. However, fate intervenes in the form of woman–a gorgeous, flaxen-haired woman. Graham will do anything to make the vision his own, even if it means entering into a bet with his nasty cousin Blair. To win the bet, Graham must rely on his best friend, governess Sarah Ambrose to teach the untutored doctor to dance, in spite of his two left feet. Close proximity and the rhythm of the dance emulate the rhythm of love for Sarah and Graham. Will they become partners for life?

“Love?” Sarah tested the word-and backed away from it, cautious. “Were you in ‘love’ this morning when I saw you at breakfast?”

“No. But I am now and, Sarah, you are my only hope.” Graham took both her hands. “You must teach me to dance.”

“Because I don’t know how,” he replied earnestly.

“Yes,” she agreed. “That’s usually the way it is with people who need dancing lessons.” She shook her head. None of what he said made sense, nor did she want to consider the implications to herself. If he was in love . . .

She reached for the door handle behind her. “We’ll discuss this later. I must return to the twins.” And maybe, in the meantime, she prayed he would come to his senses.

Graham covered her hand on the door handle with his and opened the door, squashing Sarah between his body and the door frame in a way that brought a hot rush of color to her face, and said, “Jean, Janet, place your slates on Miss Ambrose’s desk and run see Nurse. I think she has treacle tea for you.”

He didn’t have to make the suggestion twice. The girls jumped to obey, their slates clattering as they were thrown on the desk.

Sarah made an exasperated sound and slipped through the door to chase them back but it was too late. Janet was the last one through the schoolroom door, slamming it shut behind her.

She whirled on Graham. “Why did you do that? They are never good students in the best circumstances and, now, I won’t get anything out of them for the rest of the day.”

“Good,” he replied happily. “You have time to start teaching me how to dance.”

She stared into his light green eyes that she’d thought she’d known as well as her own gray eyes and realized he’d become a stranger. The thought was unsettling, as was her almost stomach-churning reaction to his claiming to be . . . in . . . love.

“This is sudden. Too sudden,” she avowed. He’d always been too involved in work and his studies to care about frivolities. “I mean, last night you were anticipating this day because Mister Fielder was to release you from your apprenticeship.”

“Oh, yes, he did,” Graham answered off-handedly and Sarah was more bewildered. Becoming a doctor had been Graham’s sole goal in life.

She sat in her “teacher” chair behind her desk. “Perhaps you should start from the beginning.”

“I’d rather start with the dancing lessons.” He leaned on her desk. “Please, Sarah, help me.”

The set of his mouth flattened stubbornly. Sarah thought Graham had the most amazing mouth. It conveyed all his emotions. Now it told her he didn’t want to be questioned. Too bad. “Talk, Graham.”

He frowned but then the corners of his mouth twisted into rueful resignation. With a sigh, he hitched one leg up on the edge of her desk and launched into the most astounding story she’d ever heard about seeing a Miss Whitlow, the Garrison Commander’s daughter, who apparently had all the virtues of womanhood without opening her mouth and how her father was hosting a ball to find her a husband.

She listened, her eyebrows climbing higher and higher. “So you wish to learn to dance to impress this young woman whose father is blatantly auctioning her off?”

He frowned, then corrected, “He’s holding a search.”

“And you want to dance in such a way as to convince him and her you would be a good lover.”

Her blunt words startled him. She made an impatient sound. “Graham, I have been about in the world. I know the implications of the Scottish proverb on the invitation.”

“There’s more,” he said, and told her about the wager, his focus dropping to the slates on her desk as he spoke, his expression taking on a new intensity.

“You didn’t accept the challenge, did you?” she asked, fearing the answer.

Sarah released a soft groan, but she was not surprised. Everyone knew Blair was jealous of his tall, intelligent cousin. She’d witnessed the petty insults and small cruelties he’d inflicted on Graham over the years. She’d considered it a sign of Graham’s strength that he had not struck back sooner. However, a day of reckoning was bound to have come.

What disturbed her were the whispers she’d overheard among the household staff about how Sir Edward did not want Graham to leave the shipping firm. Blair’s timing was too fortuitous.

She looked up him. “They mean for you to lose.”

Graham straightened. “I won’t.” He paused and added, “If you teach me to dance.”

“Me? If I?” she repeated blindly. She rose from her chair and stared stacking and restacking the girls’ slates with more force than necessary, her mind jumbled with objections and fears and–

“It’s an insane wager.” She shoved the slates away and faced him. “Graham, go tell your uncle you’ve changed your mind. Back out while you have time. They don’t mean for you to win,” she said, rapping her knuckles on the desk to emphasize each word. “They will take every advantage of you without any regret.”

He stepped back, his features hardened with the resolute sense of purpose that was so much a part of him. “I will win, Sarah. Miss Whitlow is in love with me.”

“Love?” The word sounded alien to her ears. “Because she looked at you? Did either of your speak? Did you introduce yourselves?” The challenges flew out of her mouth before she’d had a chance to consider their wisdom.

“Sometimes words are not necessary.”

“‘Twas lust at first sight!” Sarah snapped back. She wanted to shake him she was so angry. Unreasonably angry.

He took another step toward the door, his sparkling eyes growing colder, more distant. “I thought you would understand.”

Oh, she understood. There had been a time when she, too, had been willing to forsake all for love. When she’d believed in shining stars, happily everafters, and, oh, yes, love at first sight. Her “love” had left her at the altar, his promises empty, meaningless.

Nothing seared the soul like love. It had almost destroyed her.

She’d needed a full year, crammed with the most painful moments of her life to recover. Even now, the feelings of shame and humiliation from his rejection hovered near her. Graham was the first man she’d opened herself to in years. Perhaps, because he was several years younger, she had not feared for her heart with him.

However, because of their close friendship, she had to make him see reason. She chose her words carefully. “This wager . . . it could destroy your life.” She paused, needing to make him understand and, yet, unwilling to confess her own miserable experience. “As a governess, I have lived in different households. My experiences have allowed me to observe human nature.” She gripped the edge of the table, her knuckles turning white. “Once the first bloom of love fades-and it fades quickly, Graham, mark my words-what is left in its place is not to be desired.”

The tension eased in him slightly. “There is a connection between Miss Whitlow and myself. Something special.”

“Graham, what if you win and are forced to marry this young woman–”

Sarah released her hold on the desk, pushing it back to accent her words. “Or do you just not want Blair to have her?”

Graham jerked his head to one side as if she had struck him. Sarah closed her eyes. ‘Twas not like her to lash out.

His words pierced her heart. She opened her eyes. He was moving toward the door. He reached for the door handle. “And yes, I’m bloody tired of playing the lackey. If dancing to claim a woman’s hand is how I can make my uncle and cousin respect me, then I will.” He opened the door.

Sarah balled her hands into fists. She didn’t know what to say. But before her mind could form words to heal the rift between them, Betty, the cheeky upstairs maid hailed Graham.

“Mister McNab, I’ve been looking for you. What is this I hear about a wager and a dance?” Betty appeared in the doorway, a big, happy smile stretched across her face, her hips twitching saucily. Her cinch belt was laced so tight her breasts appeared to be popping forward like two beehives on a table.

Graham was forced to take a step back into the classroom lest he be run over.

“They say the Garrison Commander’s daughter practically fell off her horse when she first laid eyes on you,” Betty crooned. “Course, I don’t blame her. You would turn my head any day.” Her breasts quivered with her words.

Sarah spoke up to let the forward puss know Graham was not alone. “Don’t you have cleaning to do, Betty?”

The maid didn’t even bother a glance in Sarah’s direction. “I’ve got all my chores done and a wee bit of time on my hand. They say you might be needing a dancing lesson or two, Mister McNab. I’m a good dancer.” She bumped Graham with her beehive breasts.

Betty slipped from Sarah’s grasp and moved into the schoolroom. “Then who will teach him to dance?”

“I will,” Sarah replied.

“But I thought–” Graham started.

She cut him off, not wanting to examine her motives too closely. “‘Tis the least I can do for a friend, Graham.”

He gave a sudden, happy whoop, scooped her up in his arms, and twirled her around. “I knew I could count on you, Sarah. I knew it.”

“Yes,” she agreed numbly, her cheek against his hard chest. His movements made her a little dizzy and she was startled by tears stinging her eyes. What had she gotten herself in to?