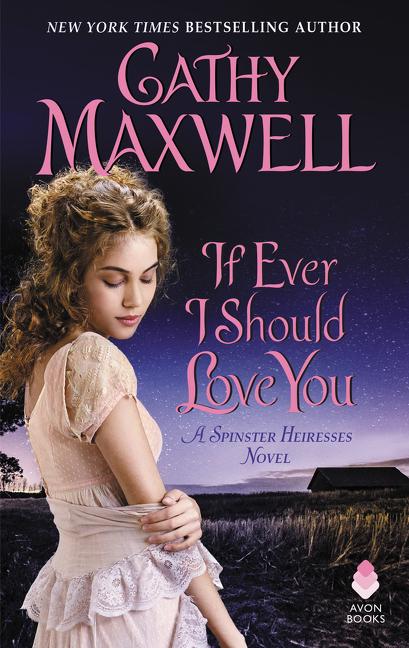 If Ever I Should Love You

Once upon a time there were three young ladies, who, despite their fortunes, had been on the marriage mart a bit too long. They were known as “the Spinster Heiresses” . . .

He’s inherited a title, but not a penny to speak of, so the Earl of Rochdale knows he must find a wife—preferably one tolerably pretty and good-tempered, but definitely wealthy, and who will exchange her fortune for his family name.

His choice: Leonie Charnock, one of the season’s “Spinster Heiresses.” Years before, the earl had saved the dark-eyed beauty’s reputation and she is still breathtakingly lovely, leading Rochdale to hope that their marriage will be more than in name only.

However, Leonie doesn’t want to be anyone’s wife. Nearly destroyed by the secrets in her past, Leonie agrees to their union with one condition: there will be a wedding but no bedding. But it’s a condition the new Countess Rochdale isn’t sure even she can keep.

Read If Ever I Should Love You Excerpt

IF EVER I SHOULD LOVE YOU
By Cathy Maxwell

(Roman asks Leonie for a dance to renew their acquaintance.)

Leonie made a sound of frustration. “I’m here for the same reason everyone is—my parents. They have been plotting for me to marry well since I was in the cradle. It is the only thing the two of them can agree upon. They wouldn’t hear me if I told them what I wanted. Fortunately, last year, I was jilted by a duke. That has made me ‘used’ goods in some people’s eyes.” She thought of Camberly. “Of course, my parents might still try to make me a duchess and then I would be forced to suffer through it all until he was bored with me.”

Leonie met his quizzical gaze. “You know what I mean. That man thing.” “That ‘man thing’?” he repeated. “No, I don’t understand. And how can you wish to suffer through life?”

“That ‘man thing’?” he repeated. “No, I don’t understand.” But she knew he did.  “And how can you wish to suffer through life?” he continued.

She blew out her breath in exasperation. “I don’t wish to suffer through life. Which is the reason I don’t wish to marry. I want something more from my life.” And she wanted to be in control of what that was.

He considered her a moment. “So, you would marry Camberly?”

Leonie crossed her arms. “I suppose I would. Then I’d be a duchess.”

“Is that what you want from your life?”

“It is what my parents wish.”

“Camberly has a man thing.”

His statement caught her off guard. “What?” Was he mocking her?

He appeared completely serious, even as he said, “You said you didn’t want a man thing and I pointed out that Camberly has a man thing. At least, I believe he does. I don’t know that for a fact, however, most men have a man thing.”

“More the pity,” she snapped.

“Yes, but you said you were open to a ducal man thing, but how do you know an earl man thing wouldn’t be better?”

“Because one belongs to a duke.”

“But what if the duke doesn’t know what to do with his man thing? Is that what you meant by suffering through life?”

Leonie would have dearly loved to slap him again, except her wrist still hurt from the last one. “I don’t find you amusing.”

He shrugged, the picture of reasonableness. “You are the one who brought up the subject of man things.”

“Then what were you talking about?”

Leonie could have screamed. Now she remembered why she had favored Arthur Paccard over Roman. Arthur had been courtly and light. Roman had been serious and had on occasion let her know he believed her immature. His verdict had angered her. Even at seventeen she had known her own mind . . . and she didn’t like being told she didn’t.

Then again, Leonie had never been so happy to see someone as she had Roman when he’d come upon her and Arthur. He’d been a savior.
She changed the subject. “Do you wish that dance or not?”

“Will you accept my marriage offer?”

“You are astounding. I’ve done my best to be as kind as possible, my lord. However, you leave me no choice other than to be blunt–”

“I’ve always appreciated your bluntness more than your kindness, Miss Charnock,” he interjected, matching her formality.

She could have boxed his ears. He was deliberately making this difficult. She decided to move on with it. “Thank you for your offer but I will not marry you.”

He appeared far from disheartened. Instead of saying the usual proper words to gracefully accept a rejection, he said, “Oh, you will marry me. You owe me, Leonie. I lied for you once. It cost me my military career. It turns out they don’t take kindly to officers shooting each other, even in affairs of honor. The time has come to pay up. I need your dowry.”

The stab of disappointment confused her. She knew her dowry was all any of them, including Camberly, wanted. However, against all logic, she had expected at least a bit of earnest pretense from Roman. Instead, he behaved as if this was a business transaction—which marriage was, except she was rather offended by this attitude of his.

Maxwell is at the top of her game with this Spinster Heiresses series starter. Readers expect the believable characters, strong plot and emotional depth Maxwell always delivers, but she adds an even deeper twist in a powerful and mature love story that is sure to become as well loved as Mary Jo Putney’s The Rake and the Reformer.  If Ever I Should Love You is a romance to read more than once!

Roman Gilchrist unexpectedly inherits the title Earl of Rochdale … and his uncle’s mountain of debts. To escape the creditors, he needs to marry for money and one of the Spinster Heiresses will do just fine. Leonie Charnock and Roman have a history together. Years ago in India, he saved her from a scandal that destroyed his career. Leonie has sworn off men and marriage. But fate has a funny way of changing her plans. She agrees to marry Roman in name only; something he isn’t going to allow. Roman realizes that Leonie is attempting to hide another problem and he’s determined to help her face the demons that are destroying their chance for happiness. (AVON, Jan., 368 pp., $7.99)
Reviewed by:
Kathe Robin