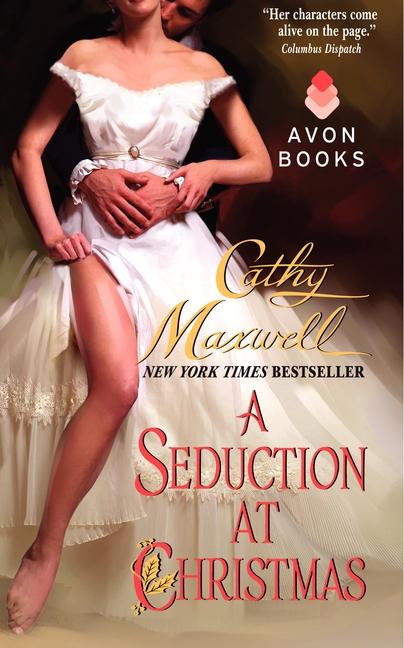 A Seduction at Christmas

SHE NEVER EXPECTED IT WOULD COME TO THIS

Desperation and an empty stomach forced Fiona Lachlan to agree to a plan that ended up luring the wickedly notorious Duke of Holburn into trouble. Everything went terribly wrong, and now she has found herself posing as his ward! And while she swore nothing could make her desire a scoundrel, even if he was a duke, she is now drawing ever closer to the one man she cannot have . . .

The Duke of Holburn had spent years heeding this warning, and in doing so, managed to avoid the virginal young ladies who had been put in his path. But now his wild ways have gotten him into real danger. There are killers at the door and a temptingly beautiful woman in his arms. He is about to find himself seduced . . . and he isn’t quite sure he wants to resist this time.

Read A Seduction at Christmas Excerpt

Dominic Lynsted, the Duke of Holburn or “Nick” to his friends, didn’t want to wake. He didn’t want to open his eyes, but a blast of cold air was not going to let him sleep. His valet, Gannon, must have left a window open, which was decidedly odd. Gannon never made mistakes.

Furthermore, his gut hurt. True, there were many mornings he felt this way. Excessive drinking was never good for one’s constitution. However, today was worse. His stomach muscles felt as if they had been turned inside out. Or perhaps the pain was more distinctive because it was his mind that was sharper—

Nick was startled to realize he was sober.

His mind was actually alert.

He couldn’t remember a time since boyhood when he’d been so aware of his senses. It was as if his body had been purged of all poisons.

Nick lay still. While he’d always meant to change his ways, he was uncertain if he was enjoying this new sensation. He felt like hell. His head might be clear but his body had obviously been trounced on by a herd of goats. Even the muscles in his ear lobes ached.

A drink would take those muscle aches away.

Slowly, Nick opened his eyes and swore. This was not his bedroom in Holburn House. He closed and opened his eyes again before accepting that what he saw was real. He really was in a tiny room that resembled a prison. The place was tidy but nothing could hide the squalor. The walls really were a drab gray from years of soot. The air smelled of a hundred different meals being cooked and from someplace in the building, above or below him, a baby cried, while from another quarter a man gave into his morning hacking.

Instead of a feathered mattress, he lay on one filled with straw and lumpy in all the wrong places. His stockinged feet—the only clothing he was wearing—hung off the end of the bed.

Thankfully, the sheets smelled clean, but a wise man would climb out of this bed before bugs found him. Nick started to rise—and couldn’t.

“What the bloody—?” Ropes banded his body that had been covered by a thin quilt.

At that moment, he heard a sound at the open window beside the bed.

A huge dog, the size of a small deer, leapt into the room. He gave Nick no more than a passing glance as he padded through a curtain hung across one side of the room.

Nick amended his earlier theory: he obviously was drunk.

A hand pulled the curtain back and a serious-eyed young woman entered the room. The dog followed her in, sitting on his haunches by her side.

She wore a simple plain blue wool dress, the clothing of a shop girl, and yet carried herself with the air of a queen.

Memory returned with a vengeance. The details were still murky but he remembered her . . . and the potion she’d poured into his drink. After that, events were unclear. All he remembered was being violently ill.

She was just as lovely as he remembered, although this morning, her eyes were tired. He almost felt sorry for her until she said in her crisp accent, “You are my prisoner, Your Grace.”

“That is one of the most ridiculous statements I’ve ever heard anyone make,” he replied. “Now come untie me.”

“You threatened to harm me—”

“I’m certain with good reason,” he cut in. He didn’t have patience. He needed a pint, or a little cider to take the edge off the morning. “Now, untie these knots and fetch me something to drink. Then, we can reminisce about last night.” Before she could respond, a wild, almost dreamlike thought struck him. “Did we really have Irishmen shooting at us . . . or was I having a bad dream?”

“Did I shoot back?” he wanted to know, the haze starting to lift from his memory.

Now he remembered all. “I merely wounded the man. I’d wanted him dead. They shot Hester Bowen. They were aiming at me and they shot her.” He frowned at the young woman. “Your name is Fiona.” He caressed the word, giving it three distinct, flowing syllables.

She nodded, watching him warily as if she hid a secret.

He plowed on, trying to make sense of it all. “Hester didn’t deserve that. I wish I’d killed the man. Those small pistols aren’t always reliable when you aiming at a man while in a moving coach.”

Her head tilted in surprise. “Do you shoot people often?”

“Only when necessary,” he answered enjoying the response. He relaxed and took a moment to give her a good look over. Drunk or sober, she was a beauty. And being tied up was rather intriguing . . .

“I thought I was waiting for Andres Ramigio,” he said, “but you arrived instead. And you thought you were to meet Belkins.”

“Who told you the Spaniard would be there,” she answered.

Nick looked up at the ceiling, thinking. “There’s a mystery here,” he said, speaking more to himself than Fiona. “But why? It doesn’t make sense.”

She took a step closer to the bed. “Hester wanted to teach Lord Belkins a lesson. He’d jilted her without offering a parting gift. So she sent him a note from Annie Jenkins arranging a private supper at The Swan.”

“Who was Annie Jenkins?”

“She is my neighbor,” Fiona said. “But she eloped yesterday morning and asked me to go in her place.”

“And why would you do that?” Nick wanted to know, searching for anything that made sense out of last night.

“Hester was going to pay me twenty pounds.”

“Ah, yes, money.” Nick remembered his coin purse. “Isn’t that the reason for everything?” He took in her body, noting all the assets that a woman could use to make money, and felt disappointment.

He’d wanted her to be better than that. She wasn’t. “Twenty pounds seems a pittance to what a woman like you could earn.”

Indignation brought color to her cheeks and a flash of fire to her brown eyes. “I’m not a whore.”

“Of course you aren’t,” Nick agreed briskly. “Neither is Hester Bowen or any of her friends. And I’m practically ready for sainthood.” He smiled, his lips twisting cynically. “I don’t know why I’m irritated with you. You are nothing but a pawn in this game. A beautiful plaything who can be bought for twenty pounds.”

Her hands formed fists at her side. “How dare you insult me?”

He laughed, the sound bitter. “You insulted yourself for twenty pounds. Now, untie me and let’s be done with this. Someone attempted to murder me last night and I’d like to discover who.”

Her jaw tightened. Her eyes had grown large in her face as he spoke, but she didn’t move.

Nick frowned. “You aren’t going to untie me, are you?”

It took her lips a second to form the word, “No.” She was obviously aware he wouldn’t like her answer.

He kept his voice quiet, controlled, silky—the better to make her realize she’d best do as he said. “Do you know who I am, Fiona? How powerful I am?”

She nodded, and then dispelled his notion that she feared him by saying, “But right now, you are naked and tied to my bed and there isn’t anyone who knows where you are save for myself. You are at my mercy, Your Grace. And if you want to be free, you’ll be paying me five hundred pounds for the privilege.”

Now it was Nick’s turn to be speechless.

“What was it you called me, Your Grace? A plaything? A pawn?” She smiled at him. “I don’t believe those words apply any longer. You’ll have to choose new names for me.”

Oh, he had names for her. They spewed from his mouth. To her credit, she held her ground, his words bouncing off her. She was a proud, stubborn queen who listened to him with a complacent half smile.

Nick took hold of his temper. “I’ll not pay you. Not even a shilling.”

“Then you may rot in that bed,” she said pleasantly.

He had to hand it to her, the Scottish lass had courage. Most men quaked in their boots when Nick lost his temper. She hadn’t flinched. “Kidnapping is a hanging offense, Fee,” he reminded her.

The threat didn’t phase her, but her nose wrinkled at the nickname. He’d use it more often.

“Sometimes we must risk hanging to survive, Your Grace,” she announced. “Tad, guard.” The dog at her side lowered into a menacing stance, his dark eyes taking on purpose. “He’s dangerous, Your Grace. A man-eater—”

“Yes,” she agreed. “So you’d best beware of both of us because you are now dependent upon me to eat, to drink and . . . to do other things.”

He laughed, realizing she wasn’t as invincible as she wished to pretend. “Other things?” he questioned, letting the innuendo of the words flow through his voice. It helped that, in a hair’s second, his mind had conjured all sorts of possibilities and his body had fallen suit.

She noticed the change in him. Hot color came to her cheeks.

Nick grinned, enjoying her discomfort while also admiring it. Life hadn’t hardened her yet. It would be a pity when it did.

“Is your courage wavering, Fee?” he chided. “Or was it that you were thinking of ‘other’ things and grew distracted?”

Her brows snapped together. “You are a beast.” With those words, she turned and marched back through the curtain.

Nick glowered at where she’d disappeared for a moment, but then he couldn’t help but smile.

How was she going to keep him tied up? Or do “other” things? She blushed every time she looked at him. All he had to do was look at her suggestively or say something sexual to make her run from the room.

She’d also saved his life last night. He remembered all now. Without her, he would have been an easy mark for the Irishmen.

Still, that didn’t mean he would let her ransom him. “You won’t find me an easy captive, love,” he called out. “You’ll have to work for that five hundred pounds.”

“Tad, growl,” she answered back.

The big dog lowered his head and made a low menacing sound, but Nick wasn’t afraid. In fact, his head didn’t hurt so much and he was beginning to feel entertained.

“Nice puppy,” he said. “You may have one of my leg bones after I’ve rotted in this bed.”

Tad gave him a wolfish grin as if he’d enjoy the chewing.