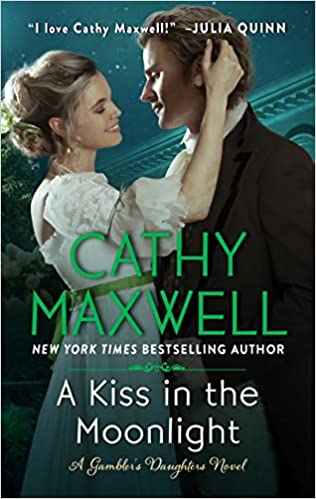 A Kiss in the Moonlight

New York Times bestselling author Cathy Maxwell begins a spectacular new series, the Gambler’s Daughters. Three aristocratic sisters must use their wits and wiles to make their ways in Regency London…only to learn the path to making a brilliant society marriage isn’t easy—especially when Love gets in the way!

To Marry a Duke…

Once there were three Irish sisters—Gwendolyn, Dara, and Elise—who had to fend for themselves when their gambler of a father disappeared, leaving them with an unscrupulous cousin. Dara hatches a daring plan: they gamble what little they own to finance a London season. Her goal: to use their looks and their wits to find a duke to marry for each sister!

It seems her crazy plot might work when the sisters are declared the “Incomparables” of the Season. Dukes and lords line up at their door, but bold women and scandal always go hand in hand. Particularly when Dara’s plans are challenged by the likes of Michael Brogan, who provokes Dara as much as he tempts her. The handsome, clever, and rising politician is definitely not a duke, but he’s determined to teach her about ambition, men, and, above all, love, making Dara wonder if her plans are about to change.

Book Details
Read A Kiss in the Moonlight Excerpt

A Kiss in the Moonlight

A gentlewoman should never indulge in imprudent freedom with a gentleman.

The Rules (according to Dara)

Some rules should be broken.

Dara surprised him with her passion. With the way she responded to his kiss. When his tongue touched hers, she didn’t draw back but met him, innocently, seductively copying his motions.

The world faded. In this moment, there was only the moonlight, the June breeze through the willow, and the weight of this woman in his arms.

Like Dara, Michael prided himself on his control. He was an ambitious man, which was the reason he could admire Dara’s determination.

However, right now, Hussars could have charged through the night-darkened garden and Michael would not have let her go. She felt too good.

And then he felt the heel of her hand against his shoulder. She pushed, and he released her.

Dara turned away, almost stumbling. Michael offered his hand to steady her, but she warned him back, her palm up.

His heart beat in his ears. Every inch of his body where she had touched him seemed needy, hot, and restless. The kiss wasn’t finished. Not yet.

She spoke, and the spell broke. “Elise.”

“I don’t wish to see you again, Mr. Brogan,” she said, a tremble in her voice. “Don’t call. Don’t speak to any of us.” In blink, she was through the willows, and gone.

Caught off guard Michael felt as if he had been turned to stone.

She had rejected him. Even after that kiss. For the first time, he realized how a woman could play a man for a fool. A simple kiss had upended everything he’d believed about himself. It had sparked something intense inside of him that he’d never experienced before— and she had walked away.

Anger replaced confusion. Dara Lanscarr thought herself too good for him? Well, he was too good for her. Besides, an attachment was not what he wanted. He had an embezzler to catch. A career to manage. And yet the silliest little word went through his mind— love— coupled with the unbidden thought that he could love a woman like Dara Lanscarr. And he didn’t understand why. There were other women more suitable for him. Women who didn’t issue ultimatums. Women who were biddable.