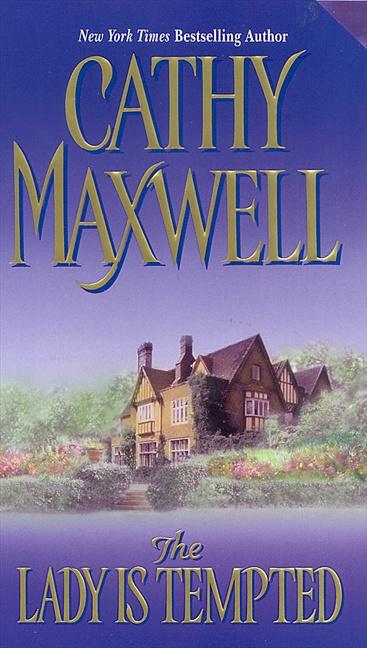 The Lady Is Tempted

USA Today bestselling author Cathy Maxwell delivers another passionate romance in which marriage is based on convenience not love, and only desire can get in the way.

“There is no impulse more delicious than ‘temptation’ . . . or more troublesome.”—Cathy Maxwell

Marry the local vicar—a stodgy man with six impossible children. Never! Deborah Percival is determined to discover passion in a man’s arms, not duty in a dull marriage. And when she becomes stranded at a countryside inn, tantalizing Anthony Aldercy, the Earl of Burnell, offers her the chance to fulfill her dreams. Deborah knows she should say no—but how can she resist?

The earl is determined to repair his reputation—and a marriage to a demure high-born lady of the ton will do this—but he cannot deny Deborah’s charms. Her lush curves tease his senses, while her delicious honesty touches his heart. But when she disappears, he’s desperate, so he searches all of London to find her, refusing to rest until he brings her into his life—and his arms—again.

Perhaps Deborah is not the only one being tempted…

Read The Lady Is Tempted Excerpt

Society widely assumes that a proper lady would never be tempted by an improper proposal-not even from the handsomest of men.
Often society is wrong.

Young widow Deborah Percival was not anxious to enter into another loveless marriage and yet, what choice did she have? As a lady of breeding, her choices were limited. But it isn’t just romance she seeks. Deborah longs to just once have a lover who is young enough and vital enough to teach her the pleasures of sex. Her secret desire is doomed to be nothing more than a wish until one rainy night when she finds herself stranded in an inn far from home with a very handsome, very intriguing gentleman . ..

“I’m surprised, what with all the inns overflowing, there aren’t more guests to join us,” Deborah said, slightly nervous at being alone with the very handsome Mr. Aldercy. “Or have there been those who were turned away?”

“Not to my knowledge. However, Miss Chalmers’s is a private residence. Not everyone knows she occasionally lets out rooms. You were fortunate.”

“And what of you, Mr. Aldercy? How did you come here?”

He cut a bite of beef. “Miss Chalmers and I are old friends.” Almost as an afterthought, he explained, “She was my nurse and later my governess. She’s always been present in my life.”

His response soothed her apprehension. The rain outside was coming down harder than ever and creating a cocooned sense of well being. She smiled and took another sip of wine. Its taste was really very pleasant.

He set his fork down, watching her.

She took another nervous sip. When he didn’t speak, she prodded, “What?”

“I think you are a beautiful woman.”

Deborah almost dropped her wine glass at his directness. No one had ever called her beautiful. She set the glass on the table, her face hot with embarrassment and made a fluttery movement with her hand. “I fear you flatter me, sir.” She picked up her fork and knife, focusing on what was safe. “My family would laugh to hear you say so.”

“Are they blind?” He continued with his own dinner as if this sort of conversation was commonplace.

He looked up and then laughed. “I never listen to my family. If I did, I’d be ready for Bedlam.”

“You are wise,” she agreed fervently and had to laugh with him-but then stopped. He was watching her again. “What is it?”

“You are even more lovely when you laugh.”

Her appetite for food vanished. In the depth of his eyes, she could see the reflection of the candle flames and her own face. Creamed peas could not compete with lust.

He set aside his own fork. “From the first moment I laid eyes on you, I’ve felt this attraction that I’ve not experienced for any another. Ever.”

She did not deny it.

Common sense warned this was too sudden-and yet her body yearned. “I beg your pardon?”

“Oh, you heard me,” he chided softly. “What’s more, you want me to kiss you. You have from the first moment we’ve met.”

She couldn’t answer. She should be outraged, incensed. Instead, she longed to feel his lips upon hers.

“Mrs. Perceival, what is your given name?”

“Deb-or-ah.” He let the syllables roll on his tongue. “A biblical name.”

Obviously, no words were necessary. He pushed back his chair and stood. She watched, eyes wide, as he came around the table to her. He held out his hand.

“I’m not certain we should,” she whispered truthfully.

“We shouldn’t.” His expression grave, he added, “But I don’t believe we can help ourselves.”

She stared at his outstretched hand . . . and realized he was right. She wanted him to ravish her, to take her up to her bed and introduce her to what she suspected had always been beyond her grasp.

However, she was a lady. Ladies did not throw themselves at gentlemen. “We haven’t finished eating,” she protested weakly.

One kiss. Could that be so terrible? Especially here, where no one knew her? Especially since she wanted one so much?

She placed her hand in his. Moving as if in a dream, she came to her feet. They stood facing each other, toe-to-toe, the scent of sandalwood making her senses swim.

Staring at the knot in neck cloth, she said, “This isn’t wise.”

“I only want a kiss,” he answered. “One little kiss.” Before she could object, his lips covered hers right there in the dining room.

Deborah’s mind went blank. She should protest, proclaim her innocence, express her decorum.

But then, another part of her, a part born from curiosity and unfulfilled lust, wanted to mew like a hungry kitten for more. Mr. Aldercy’s kiss was a far cry from her husband Richard’s perfunctory pecks. This was a full-lipped, on-the-mouth, real man behind it kiss.

After all, what harm could a little taste do? And, having been married to a man who’d been more of a father figure than a lover, she was more than a touch curious about what she had been missing.

With a soft sigh, she let down her guard.

Mr. Aldercy’s hand went to her waist and pulled her closer.
The kiss changed. His lips became more searching, insistent. She hesitated, uncertain . . . and then decided if she was going to experience kissing properly, she must throw caution to the wind. She kissed him back for all she was worth.

He broke contact. She would have pulled away, but he held her near, his arm still around her waist. The light of a thousand devils danced in his eyes. “Mrs. Perceival, what are you doing?”

Hot embarrassment flooded her cheeks. She wasn’t sure how to answer. “I thought you knew what we were doing,” she replied stiffly.

A low hum in the back of his throat was his answer. “If that is all you know of kissing, then, with all due respect to your late husband, you have been sorely neglected.” He took her hand and pulled her toward the door. “Come.”

Apprehensive, she asked, “Where are we going?”

“To a place where I can teach you to kiss properly.”

Deborah hung back. “I don’t see why you can’t show me here.”

He turned. He was so tall, so strong, so overpowering and yet his reassuring squeeze on her hand was gentle. “I don’t want Roald or Mrs. Franklin to walk in. Not if we are going to be after a proper kiss.”

That would not do.

As if to lend credence to his words, a footfall sounded behind the pantry door. It started to open.

“Come.” This time, she didn’t hesitate but hurried behind him. She couldn’t help herself. Her hand felt safe in his . . . and she did want her kiss-if for nothing more than to satisfy her curiosity.

After all, she couldn’t very well ask anyone in Ilam to teach her. Mr. Aldercy was providing an excellent opportunity.
However, she did have second thoughts when he started for the staircase. She balked. “Why not the sitting room?”

He paused, one foot leading up the stairs. “Too public. At least, for the kiss I have in mind.”

Upstairs were the bedrooms. She wasn’t so naïve that she didn’t suspect his intentions–

Deborah panicked. What if he looked out in the hall and saw the two of them standing there in this ridiculous pose like she was a reluctant mule Mr. Aldercy had to coax forward?
They could dash into the sitting room-but then, she wouldn’t get her kiss. And she wanted one very much.

With a glance over her shoulder to ensure no one saw them, she charged up the stairs. Mr. Aldercy fell into step behind her and they hurried like school children afraid of being caught in a prank.

However, at the top of the stairs, games stopped. He whisked her up the last step, twirled her around until her back was against the wall, and kissed her.

She was caught by surprise, her lips parting in a small gasp–and he didn’t wait for her to press them together before settling his mouth over hers. Startled, she attempted to close her lips together, but he’d have none of it. His body pressed against hers, backing her to the wall. He slanted his head and urged her to open even more to him.

This kiss was much different.

For a second, she was awkward, inflexible . . . and then, ever so slowly, she realized this was quite pleasant. Very pleasant. So much better than a hard buss with tight lips.

She’d always sensed there was something more, now she knew she’d been right! This was what she’d been searching for.

More importantly, kissing him was as natural as breathing.
The sounds, smells, and morals of the world faded and there was only him and this kiss.

This was something altogether different. This was beyond kissing. This was intimate.

But instead of shying away, of ending it all right here, thanking him very much, and going to her room like the good, well-bred woman she was-she accepted him.

She even kissed him back.