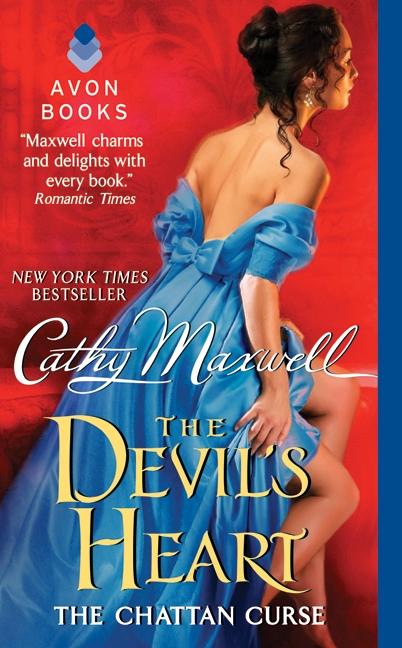 Lady Margret Chattan, one of the most desirable women in all of England, has no interest whatsoever in marriage. When her brother’s lives are put in danger, she travels to the Scottish Highlands, intent on saving them. There she meets Heath Macnachtan, who is trying to find out who murdered his own brother. Together, they team up to investigate the powerful curse that is behind the deaths, but instead find themselves falling in love.

The third book in the Chattan Series

The word rang through the stable yard. Heath, Laird Macnachtan, turned to see Lady Margaret Chattan standing on the path leading to the house. She wore a red cape and her black hair curled around her shoulders. Her face was pale, her cheeks rosy, and her blue eyes were lit with the fires of righteous anger.

Here was not a pampered society miss, but a medieval queen ready for battle.

Heath stepped forward, suddenly too aware of the beard stubble on his jaw and the muss of his hair. He could smell the pigs on him . . . just as he caught the scent of her. She smelled of the forest, of dark greenness and night air.

God, he’d lost his mind. In a second, he’d be spouting poetry. That was how strong his reaction was to her.

She pulled her arms free from her cape. In her hands she held a pistol.

Heath recognized the weapon. He’d discovered it himself when they been collecting her things around the accident. He’d placed it in her traveling case along with a bag of black gunpowder. He hadn’t thought it was hers or that she would have desire to use it.

She now proved him wrong by leveling the gun on him.

Rowlly and several of the other lads stepped forward as if to overpower her, but Heath held up his hand, warning them back.

This woman was fragile and frightened even though they had done nothing to harm her. He wanted to hear what she had to say.

He also suddenly, blessedly, felt very alive. She could pull the trigger and shoot him dead. This was the edge of danger, of adventure he missed from his military days and he reveled in the moment.

“What is it that you want?” he asked, his voice calm. “If you wish to shoot me, fire away . . . but I must warn you that your gunpowder was very wet when I found it. Your weapon could misfire.”

“I want Fenella’s book. I must destroy the curse,” she said. “I want it over and done.”

He folded his hands in front of him, keeping himself relaxed. “And how may I help you?”

Heath frowned. “Who is Fenella?”

A collective gasp seemed to rise from the crowd behind him and Heath wanted to shake his head. There would be more stories around the table tonight.

“My lady,” he said softly, “there is no curse.” He dared to take a step forward.

She cocked the pistol. “Yes there is and well you know it, Macnachtan. You took my book. I want it returned.”

His good humor faded. No one called him a liar. A rascal, yes, but a liar, no. “I know nothing about a book. Whatever you had that we found, we placed in your room. Nor have ever I heard of a witch named Fenella–”

“She is in your family line.”

“Not in recent years.” Heath hardened his jaw. His temper was rising. “I’m surrounded by women, my lady, but not by witches. Come, give me the gun.”

She shook her head. “Fenella is alive. She never died, don’t you understand.”

“I understand I am beginning to doubt your sanity.” Heath raised his voice, speaking to his clansmen than to her. “If Fenella existed, she is dead. She is long gone. Hand the pistol to me, Lady Margaret, and we shall discuss this in private.”

Her grip on the gun tightened. “I don’t trust you. I don’t trust any of you. Fenella murdered my companions. She caused the accident.”

“She swept us off the road.”

“The wind through there is high during a storm. The road is not good. The locals know that.”

An angry muscle worked in her jaw. “That is not what happened. The road was good. The wind swept us off it as if we were crumbs on the table. They all died because of her. I should have died. I did die.”

Heath wasn’t certain what she meant. “But you didn’t, my lady.”

“I did,” was her answer, her voice shaking slightly. “I don’t know how I am here now.”

The woman had lost all reason.

Heath began calculating his chances of taking the gun from her. He decided the direct approach was the best.

“Hand the gun to me,” he said, using the voice he used to soothe his sisters when they were unreasonable. “You are tired. You have been through a horrible ordeal. Let us return to the house so that you can rest.”

“I don’t have time to rest.” She held her gun up higher. “I must stop this curse.”

Rowlly had eased himself around her. She had not noticed yet.

“We will help you,” Heath promised, “but first you must give me the gun.” The poor girl, she was caught up in fear, a fear of the supernatural.

Rowlly’s foot kicked a rock on the path behind her. She took a step aside to include him now in her sights. “Stay back,” she warned.

“Do as she says, Rowlly,” Heath ordered. He dared another step toward her. “Lady Margaret, you have nothing to fear.”

“How do I know that?” she demanded, the frown line between her eyes deepening.

“You must trust us,” he said. He took another step.

“And yet you are amongst us,” he said in understanding.

She shook her head. “Do not come closer.”

“The gun is no good to you,” he told her. “The gunpowder was wet from the rain.”

For a moment, she appeared uncertain.

“Let us discuss this matter,” he encouraged, moving toward her. He wanted the gun from her. He didn’t believe she would fire it. He didn’t think she had the fortitude.

Heath was six feet away from her when she pulled the trigger.

Spirited and tender . . . a joyride that careens from adventure to adventure.”

Maxwell has penned an intriguing, suspenseful story with supernatural elements that keeps the audience captivated and curious…. A fresh, unique storyline that encompasses mystery, an avenging witch and a high-stakes love affair make this an intriguing, satisfying romance.”

With its memorable characters and well-written plotline brimming over with supernatural elements, this last of the Chattan Curse trilogy is a fitting conclusion to the series.”