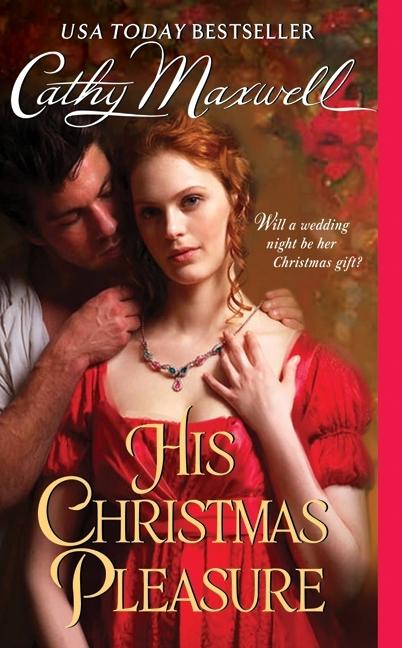 Anything Can Happen at Christmas!

When her father threatens to marry Abigail Montross off to a man twice her age (and with thirteen children!), she decides to elope instead with the irresistibly handsome Baron de Vasconia. She know all abut his notorious reputaiton. He is the most seductive man in all of London, but he’s vowed to protect her, so she allow herself to be tempted into his bed, promising to guard her heart at all costs.

Andres believes he’s entered into nothing more than a marriage of convenience with a charming and very wealthy young woman. But the days–and nights–Abigail spends in his arms soon reform this rogue. He’ll do anything to gain her love–until they each discover the truth about the other and old wounds are revealed.

It’s the season of miracles and passion–when love not only awakens the senses but delivers the greatest gift of all . . .

Abigail Montross took a step away from the Barón de Vasconia. Conscious that they’d become the center of attention in the crowded ball, now might be a good time to return to her parents, with or without his escort. There was a wildness in the elegant Lady Dobbins’s eyes and a tension in her body Abby didn’t trust.

But her movement caught her ladyship’s attention. Vivid blue eyes, the ones countless men had celebrated in poetry to her beauty, honed in on Abby with the intensity of a hawk seeking prey.

“This is what you think to replace me with?” Lady Dobbins murmured. Her lip curled.

“Not here, my lady,” the barón warned, steel in his low voice. “We have an audience. Let me escort Miss Montross back to her family and then we will talk.”

But Lady Dobbins either didn’t hear him or didn’t care. “Montross?” she repeated. “The banker’s daughter? The one who was jilted? Oh, I see now why she was tossed aside. Good heavens, Andres, have you no eyes? I thought you Spaniards were lovers of beauty. Or have you lost your good taste?”

Abby wasn’t the only one stunned by the woman’s meanness. A collective gasp went up all around them, sending a burst of heat to Abby’s face–which only made her look more pathetic. The crowd’s sympathy aside, she could feel their eyes dissecting her every feature. Even the musicians had not lifted their instruments to play the next set

The barón pulled Abby behind him. “Do you think you are the only beautiful woman here, my lady? You are wrong. Miss Montross has a beauty you could never hope to attain.”

“Beauty?” Her ladyship snorted her opinion. “You find beauty in ruddy cheeks and a button nose?”

The barón answered. “Also her youth–?”

“She is not that young,” the countess lashed out.

“She’s much younger than yourself, but I’m talking about her spirit. It is young. She’s a believer, Carla, something both you and I gave up long ago.”

“Because we are realists,” Lady Dobbins said in her defense. “Sophisticated.”

“And value nothing,” he agreed.

“And see where you are now?”

Her ladyship drew back. She glanced at those around them as if just realizing she was creating a scene. A wiser woman would have retreated.

Lady Dobbins wasn’t wise. “All a woman has, all that is important about her, all that matters are her looks. You’ve made that very clear, barón, with so many of us. Now it appears you have developed a taste for, well, something other than the sublime. For example, her hair reminds one of a curly, overripe carrot.”

“Her hair reflects her joy in life. ”

“Natural or not, eh?” her ladyship said. “And, yes, I am older, but she is wrinkled. She’s almost as withered as a prune.”

“Those aren’t wrinkles,” he said with a sigh as if bored with the discussion. “They are the lines left from laughter. And who wants a blank canvas? A man needs to know his woman can think and feel. A rose opens as it ages, becoming more fragrant, more full in blossom, more lovely with time. I see in Miss Montross’s face her strength of character. She meets life on her terms and doesn’t need to humiliate another to make herself important..”

Several heads around them nodded agreement. Most of those nodding were men.

Lady Dobbins’s chin shot up. “Character?” she quizzed “What would you of all men know about character? You are a pretty boy, barón. A charm. You haven’t done one meaningful thing in your life, and now you are holding up this silly, gap-toothed, flat chested chit as a paragon for all of us to admire. Look to yourself, my lord, before you chastise me.”

Abby did have a small gap between her two front teeth. It was a family trait. Her mother and her cousin Corinne had gaps as well.

She wished the floor would open up and swallow her whole. She didn’t care what people thought of her chest, but that small separation between her two front teeth made her terribly self-conscious.

“Her smile is charming,” the barón said. “As for endowments, not all men like overripe melons, my lady. Especially amply displayed ones.”

Her words sucked the air out of the room for Abby. She’d tried not to think of the two of them together. She wanted to like the barón and she didn’t like the countess . . . but he had.

Without breaking stride, he coolly answered, “My tastes have changed.”

He was defending her, but his words struck Abby as cruel. As male.

And everyone listening would imply that now she was his next conquest. It would be her name linked to his in the papers on the morrow. She could see it now. She would be referred to as the “mysterious Miss Gap Tooth”-and she was ruined. She wasn’t a married woman whose husband obviously looked the other way from her indiscretions. She already had enough rumors swirling around her.

Worse, Freddie’s father, the earl could be smug in the knowledge that he’d saved his son from such infamy. Corinne would never find herself caught in such a scene as this. Corinne was perfect, sensible, dutiful.

Nor was Abby the only one hit by his words.

Lady Dobbins jerked as if jolted with a shot of electricity. Had she truly thought she could stomp her satin clad feet and a man like the barón would be contrite? Abby hadn’t known him long but he didn’t strike her as a lapdog.

Her ladyship’s venom came out in physical violence. She slapped the barón, the action short, to the point, insulting. Then, ignoring the scandalized gasps around her, Lady Dobbins sailed away, head high, the crowd shuffling back to let her pass.

There was a beat of assessing silence. Abby assumed most people were like herself, shocked beyond belief.

And then the low, agitated hum of conversation as word of the scene was passed from one pair of lips to another.

The barón turned to her, his silver eyes somber as if he knew the cost of this scene to Abby, but she wasn’t in the mood for apologies. Her reputation, indeed, her life was now completely in a shambles with no hope for recovery. Freddie would never marry her and her father would be hard pressed to find any husband for her.

“I am sorry,” the barón said, and Abby lost all sense.

Her hand flew through the air, powered by her frustration, her shame, and her fear.

Her slap was not as neat, concise, and ladylike as Lady Dobbins’s. It carried the full force of her turbulent emotions. Not only that, but she was a rather strong woman. The sound reverberated through the ballroom.

For a heartbeat, the world stopped.

Her angry finger marks reddened on his skin. He raised a hand to his jaw, frowning, angry, confused. He’d want answers–and she didn’t want to give them. Not here.

She took the only action open to her, she ran.

The crowd didn’t part for her. She had to shove her way, heading for the only refuge she had in the room, her father.